Academy seniors apply to colleges together at annual lock-in event

“Andrew just applied to Colorado Mesa!” a teacher yelled in a student-filled auditorium before he handed the young man a Mardi Gras necklace.

Andrew’s classmates responded with claps that almost drowned out the clacking of his shiny, green beads as he adjusted them around his neck. A couple seconds later, everyone’s hands returned to their laptop keyboards. Back to work. That was a scene repeated every few minutes at Mapleton’s Skyview Student Center on Thursday, October 20, as about 90 of Academy High School’s seniors participated in their annual College Application Lock-In. For four hours, students sat in circles diligently applying for colleges, and some scholarships. Mapleton’s college and career-going culture is supported by the district’s rigorous graduation requirements and events like this one, to assure all Mapleton students achieve their dreams.

“Seniors are busy with school, after-school activities, sibling responsibilities, and jobs,” said Kim Adams, an Academy High School post-secondary options coach who helped organize the event. “It’s hard to devote the time, energy, and effort to focus on their futures, so we wanted to give them the opportunity to do that here.”

Abe C., a senior interested in pursuing a criminal justice degree, thought it was a fun experience for an important purpose.

“I think it’s a good idea. It helps us connect in a way as a class and it also helps us focus on just applying without any other distractions,” he said.

Diversions were kept to a minimum and the students rarely had to leave their chairs, or even venture very far for assistance or essentials, like snacks and water. Teachers hovered all around to help their pupils answer questions and spent the last month preparing them for the day by practicing and helping the students gather necessary information. The teachers even laid out a table of treats to provide a little sugar boost. 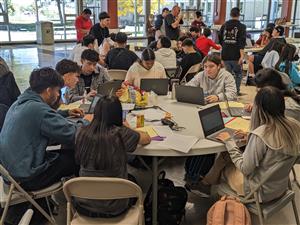 The necklaces, awarded for each application, and public announcements, served a few purposes. They not only acted as trophies for the students’ accomplishments and let their peers cheer them on, but they also gave teachers an idea of how each kid was doing.

“Selfishly, they gave us visuals, so as we looked at a table, if we saw one student didn’t have many, or any, necklaces, we could sit down and help them out a bit more,” Adams said.

Academy staff scheduled the event to coincide with Colorado’s annual Free Application Days. During this three-day window, all Colorado residents can apply to every one of the state’s public universities, and most of its private institutions, at no cost. This is meant to remove the barrier of application fees so students can apply to as many in-state colleges as they want.

“My family is low income, so that was really important,” said senior Joycelyn Y. “It’s helpful to get these free waivers, because our teachers said normally applications can cost about $35 to $70 per school, and that can add up.”

That savings might pay big dividends. After she graduates from college, she said she plans on attending medical school before becoming an OB-GYN.

Staff also invited representatives from some state colleges to help answer questions about applying to their schools, and in some cases, offer good news.

Miranda S. is currently in position to graduate at the top of her class and a Colorado Mesa University recruiter told her that, because of her academic status, they could offer Miranda a full ride all four years. Miranda was flattered, but still planned to apply to a handful of other schools before the day was through.

“I’m not decided on what school I really want,” she said. “I’m still looking at all my options.”

She will probably have plenty to count, which should be easy as she said she wants to become an actuary after she graduates from college.

By the end, the students completed about 300 applications, combined. Then members of the military discussed their careers at a special panel. Adams said this was included because staff have grown the event over the years to become a more comprehensive, post-secondary planning day. Previously, they have invited other professionals, like mechanics, to discuss apprenticeships.

“Sometimes, students feel college just isn’t for them, and we want to honor and respect that and let them know about other opportunities, so they know they have options,” she said. “No matter which direction they choose, it’s up to them and we want them to be happy and healthy after they leave us.”